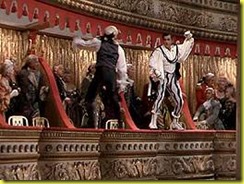 It’s fitting that this early movie swordfight of the sound era includes as one of the participants the son of the great swashbuckler of the silent era, Douglas Fairbanks Sr, who more or less invented the genre.

Stand-ins are used for the longshots, at least for Mr. Colman, but the sequence is made by Fairbanks’ exuberance and the witty banter of both participants—which set a prototype for action sequences between hero and villain that continues to this day. The sequence is made by the quick-paced editing—which makes the fight more exciting than that of the 1952 remake.

Both competitors had previously squared off in CAPTAIN BLOOD (1935), but this sequence tops that one. I find this the most exciting of all movie swordfights. The athleticism of both men is well on display. The photography, with shadows against castle walls (used also in “ZENDA”) is striking. The music by Erich Wolfgang Korngold is stirring. The sequence is best positioned within a framework of increasing drama and excitement in the overall film, as the fight between the forces of good and evil reach a climax. As fun and exciting a movie as ever made.

Basil Rathbone was the best fencer among Hollywood actors, which, along with his sneering, arrogant acting performances, made for easy casting of villain parts. Here, Tyrone Power has obviously taken some fencing lessons himself. If the previous swordfight is the most exciting, this is the most perfect. The entire movie builds to this conflict, with Rathbone the fencing master carrying a sword throughout, while Powers pretends to be a fop. The bit with the candles immediately before they commence to fight is classic. The swordplay is excellent, as both men tear through an office, close action, perfectly paced, the battle ending at the right moment to remain thrilling to the end.

This is the ultimate swordfight. It’s the longest—lasting more than six minutes. It takes place not in a castle or office or beach, but throughout an entire opera house—on railings, in boxes, hallways, behind the scenes: everyplace. More is less, as the sequence is too long to achieve perfection. Perfection is being thrilling but also leaving viewers wanting more. Still, Stewart Granger is flamboyant and athletic—not quite Flynn, Fairbanks, or Power, but close. Ferrer is properly intense and villainous. The sequence is great fun.
Posted by King Wenclas at 7:19 PM